Visitors to the National Art Gallery of Namibia can currently experience the works of art from 27 local and international artists showcasing the results of a 2 week workshop in the vastly inspirational area of Gobabeb as part of the 2015 Tulipamwe International Artist Exhibition that includes the mediums of painting, photography and a fascinating array of sculpture. Tulipamwe means “we are together” and no other exhibition represents this idea more than the interactive exhibition by Kirsten Wechslberger. In her exhibition Kirsten has managed to achieve something truly remarkable: a piece that is intensely personal and depictive of the artist herself, while also speaking to each member of the audience on one aspect or another, showing that while we all experience our lives as uniquely our own, we can still relate in our humanness and so “we are together”.

The spectator will encounter Kirsten’s exhibition as containing 3 main elements: a rusted skeleton of an old mattress made up with a comforting blanket and teddy bear; 169 little numbered tiles; and a typed up document with 169 entries corresponding to the tiles.

The very concept behind the exhibition was clearly extrapolated from the provocative image of a discarded old mattress with its covers disintegrated by the passage of time and its rusted innards open and exposed to the elements.  Based on this rustic scrapyard find, Kirsten applied the imagery to her own life compiling 169 memories she experienced on mattresses and in beds since her childhood to maturity, basically answering the hypothetical question of “what if our mattresses could talk.”  Each memory includes her age, the location of the mattress, the memory associated with the mattress and her current emotions attached to the feeling or how she feels about the memories now. 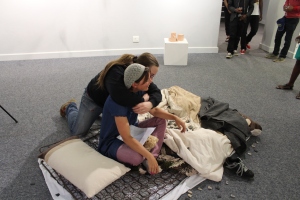 If our mattresses could talk, the tales they might tell would be some of our most intensely personal experiences of joy, hurt, intimacy, playfulness, peace and also of loneliness, restlessness and exhaustion. This is perhaps even more true for Kirsten who has seen her share of mattresses as she relocated and changed her address from Brakwater to her hostel bed in the Deutsche Schule in Windhoek, a multitude of 061 neighbourhoods, faraway places like Finland and Australia, surreal and dreamlike places of rest like when she created a cosy nest on top of her hostel window, a mattress in the middle of a dance floor and, of course, places of restlessness and discomfort huddled and hiding in a cupboard, waking up scared in a hospital bed and the wretchedness of trying to inebriatedly sleep in an uncomfortable car.

Picking up tile after tile, and reading their affiliated memories, Kirsten’s mattress bares all.  It shares memories of friendship and belonging, of building fantasy worlds, jumping and playing on the bed, pillow fights and giggling with abandon. Of Edith Piaf and the smell of bacon. But it also recounts tales of abandonment, loneliness, cruelty and fear. It reveals the complexity of family relationships from her feelings of guilt and fear, but also of belonging and acknowledgement. It tells of cats and dogs and animal excrement. And of course, as mattresses do, it talks about sex. From her earliest memories as a child, her bare mattress narrates to us lurid tales of molestation and abuse.  It recounts how her virginity was lost awkwardly and. It talks about rape. It talks about bad sex and being unfulfilled. It talks about the inevitable loss of desire as love runs out. It talks about sex with girls, sex with men, threesomes, fumbling sex, rough sex, break-up sex. It talks about good sex and love and how it can make you feel beautiful and free. It talks about lust and sensuality and of love won and love lost. It tells us tales of dejection, anguish and blades cutting skin just to feel again. It recalls wanting to die and attempts at suicide. But then there are moments of understanding, complete clarity and gratefulness. Tile by tile and memory by Kirsten’s exposed mattress recounts to us her life and her soul’s journey and continuous attempt pursuit of self-discovery, awareness and love. It does not falter or withhold, but bares all for scrutiny.  It opens up for dialogue that which so often happens and is kept behind closed doors and so remains censored by our silence. In an act of bravery, Kirsten strips off all her layers and completely exposes herself to us, and so in essence she herself becomes the artwork.  She lays herself on the bed and asks the audience to reach out and expose ourselves to her deepest secrets, all of it, even that of which we usually remain silent and blind. 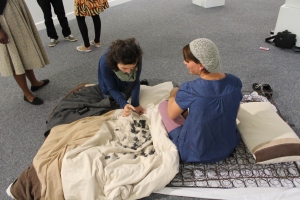 Having been at the opening of the exhibition, we were privy to having Kirsten herself read out her memories one by one as members of the audience randomly selected tile after tile. This added a whole other dimension to the exhibition as we were able to observe Kirsten truly as the artwork herself, as well as the reactions of the public as “their” memory was read, which blurred the line between artist and spectator as only truly great interactive performance art can do. Being able to observe this interplay where the sum (the reactions and interactions) becomes greater than the parts (artist and spectator) was perhaps the most awe-inspiring element of the performance. Many participants would select a tile that was almost written for their lives and that could have been their own memory. Others selected tiles that made them visibly uncomfortable, blush crimson red and break out in sweats, making you wonder what they were thinking.  Many shared their thoughts and insights on some of the experiences to which Kirsten and the audience listened curiously and made the ultimate performance a rich tapestry of contributions from both the artist and onlookers.

One spectator mentioned how she found the performance to be too exhibitionist, which I agree it is to the highest degree, but purposefully so. Sitting on the rusted, exposed mattress we watched Kirsten as she wrestled through some of the tiles and laughed and giggled her way through others. Listening to people’s comments, her face was a canvas on its own. At times she was visibly uncomfortable, she often blushed and turned a bright crimson red, she sweated, she fidgeted, she crossed and uncrossed her arms and legs and at times took a swig of red wine.  Watching her bare her soul so publicly was watching a profound process of catharsis that, like a confession, lifted a heavy weight.  Realising then that this exposition of self-disclosure is a personal purge of which the audience is an eyewitness as well as a mirror I, like many others, felt compelled to stay until the very last memory had been confessed and the mattress had no more tales to tell. 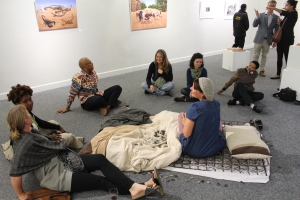 From its conception from mere rusted relic to its ultimate execution, Kirsten’s project is truly awe-inspiring and spell-bounding. Her vulnerability and honesty to open herself up for display and to talk about that which is not spoken of is an act of bravery and her ability to draw the audience in and let them facilitate the process and so become part of the artwork itself is a feat of superior artistry that leaves one in awe and admiration.